Ginger is the washed, irregular-shaped rootstock (rhizome) of the reed-like ginger plant of the family Zingiberaceae, which is cultivated in the tropics and grows as tall as 1.5 m. The rootstock shape resembles a human hand (hands or claws). 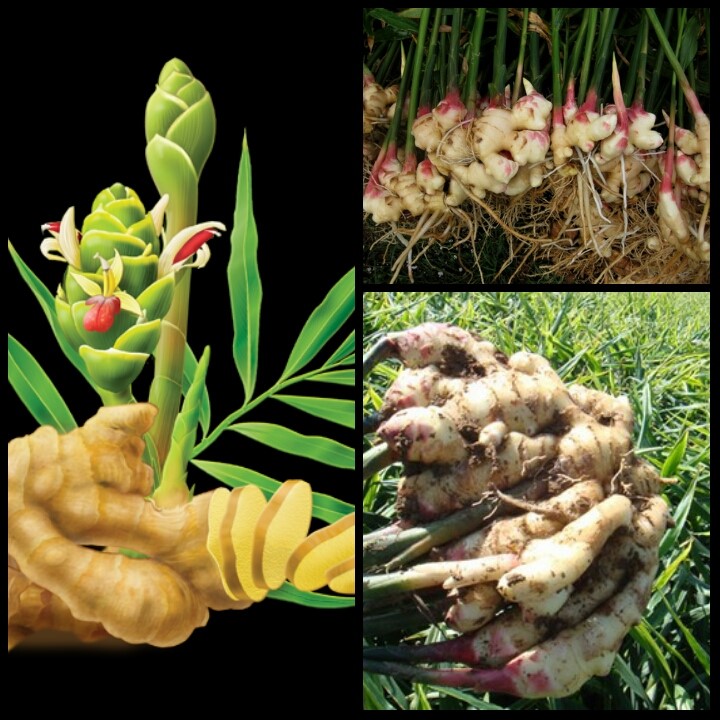 The term spice is used to refer to plant parts which serve to improve the odor and flavor of foods. They contain essential oils and other ingredients which have a strong seasoning action.

Ginger is used domestically and in the food and pharmaceutical industries.

Ginger serves as a cooking spice for pickling pumpkin and gherkins and is an ingredient of curry powder. It is used in oriental and Indian cooking and in bakery and confectionery products and liqueurs. In Asia and Africa it has many medicinal uses.

In Indian cuisine, ginger is a key ingredient, especially in thicker gravies, as well as in many other dishes, both vegetarian and meat-based. Ginger also has a role in traditional Ayurvedic medicine. It is an ingredient in traditional Indian drinks, both cold and hot, including spiced masala chai.

Fresh ginger is one of the main spices used for making pulse and lentil curries and other vegetable preparations. Fresh ginger together with peeled garlic cloves is crushed or ground to form ginger garlic masala.

Fresh, as well as dried, ginger is used to spice tea and coffee, especially in winter. Ginger powder is used in food preparations intended primarily for pregnant ornursing women, the most popular one being katlu, which is a mixture of gum resin,ghee, nuts, and sugar. Ginger is also consumed in candied and pickled form. 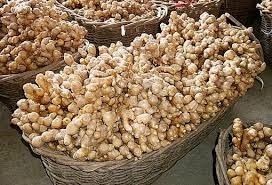 In Japan, ginger is pickled to make beni shoga and gari or grated and used raw ontofu or noodles. It is made into a candy called shoga no sato zuke. In the traditionalKorean kimchi, ginger is either finely minced or just juiced to avoid the fibrous texture and added to the ingredients of the spicy paste just before the fermenting process. In Burma, ginger is called gyin. It is widely used in cooking and as a main ingredient in traditional medicines. It is consumed as a salad dish called gyin-thot, which consists of shredded ginger preserved in oil, with a variety of nuts and seeds. In Thailand' where it is called ??? khing, it is used to make a ginger garlic paste in cooking. In Indonesia, a beverage called wedang jahe is made from ginger and palm sugar. Indonesians also use ground ginger root, called jahe, as a common ingredient in local recipes. In Malaysia, ginger is called halia and used in many kinds of dishes, especially soups. Called luya in the Philippines, ginger is a common ingredient in local dishes and is brewed as a tea called salabat.[7][8] In Vietnam, the fresh leaves, finely chopped, can be added to shrimp-and-yam soup (canh khoai m?) as a top garnish and spice to add a much subtler flavor of ginger than the chopped root. In China, sliced or whole ginger root is often paired with savory dishes such as fish, and chopped ginger root is commonly paired with meat, when it is cooked. Candied ginger is sometimes a component of Chinese candy boxes, and a herbal tea can be prepared from ginger. 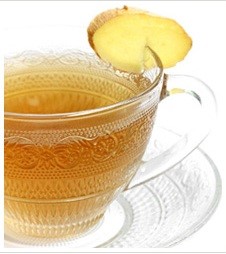 In the Caribbean, ginger is a popular spice for cooking and for making drinks such as sorrel, a drink made during the Christmas season. Jamaicans make ginger beer both as a carbonated beverage and also fresh in their homes. Ginger tea is often made from fresh ginger, as well as the famous regional specialty Jamaican ginger cake. On the island of Corfu, Greece, a traditional drink called (tsitsibira), a type of ginger beer, is made. The people of Corfu and the rest of the Ionian islands adopted the drink from the British, during the period of the United States of the Ionian Islands. In Arabic, ginger is called zanjabil and in some parts of the Middle East, gin?gayu. The Hebrew name for the spice,zangevil, is a variation on the name. In Western cuisine, ginger is traditionally used mainly in sweet foods such as ginger ale, gingerbread, ginger snaps, parkin,ginger biscuits, and speculaas. A ginger-flavored liqueur called Canton is produced in Jarnac, France. Ginger wine is a ginger-flavored wine produced in the United Kingdom, traditionally sold in a green glass bottle. Ginger is also used as a spice added to hot coffee and tea.